The sun came out to shine on the Calne Saturday Market where we saw the Tourism Group presenting the Wiltshire Cure & the A4 Tourist Route through Calne.

There was a lot of interaction with the townsfolk of Calne and a real want for information.

Presenting the Wiltshire Cure was Debbie Smith, Bob Marshall & Jane Marshall amongst other supporters and helpers. There has been a lot of press of late on the rebranding of Calne as the Home of the Wiltshire Cure (Wiltshire Ham)). It was great to see the old books from the Heritage Centre out on display and seeing Calne as it was in years gone by. The Harris family cured Ham in a special way and it became as a unique process accredited to Calne.

The stall will also be present at the September Food festival where you will be able to taste Bacon cured in the old fashioned way.

John Skinner was there to answer questions on the proposed A4 tourist route.

Linking Hungerford to Bath Visit Wiltshire are teaming together other Wiltshire towns on the route. It is hoped it will be a wonderful new route to attract tourists. BBC Wiltshire has been promoting it on the radio for the last few weeks and it seems to have caught the imagination of the whole of Wiltshire. Lots of fond memories of travelling down the A4.

People are already penning lyrics to the tune of Route 66.

Also there was Graham Smith promoting one of our  attractions The Atwell Motor Museum. Graham is currently working on taking a Vintage Car on the route and getting a video put together. Calne is slap bang in the middle of the route and should benefit immensely from the tourists that will drive down it.

It is good to see the Markets of Calne flourish again. Wiltshire Council have done a great job in creating a good market every Friday now in Calne.

Chris Robins who was a big factor in the re-emergence has also worked hard on getting the Saturday market going also. Every Second Saturday of the month.

Check out the rebrand on the website in September also. 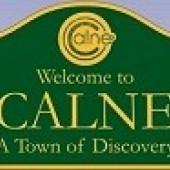